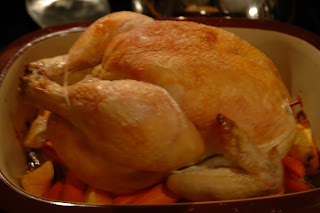 So…are you like I was just a few short weeks ago???? Had you never, ever roasted a chicken in your very own oven???? Had you only bought roast chicken at the grocery store???? Well, I’m here to change all that!!!

Seriously, it is one of the easiest things to cook EVAH! And it is so so tasty.

Roast Chicken ala Merry (I’ve looked at lots of recipes that give generally the same instructions. This is what I did the other night)

1 whole chicken
Olive Oil
Coarse Salt
Potatoes (spots removed, peels on & cut in pieces)
Carrots (peeled & cut into pieces)
Onions (cut in half then cut each half into 8 wedges)

Preheat oven to 350°F. Put the potatoes, onions & carrots in the bottom of a roasting pan. Make sure the chicken is clean and all the feathers are gone (they often have some left under the wings…just pull them out). Place chicken breast side up on top of the veggies. Brush chicken with olive oil. Sprinkle coarse salt all over the chicken. Use quite a bit. It will seem like too much but it’s not.

Bake for 2 hours & then check it. Ideally you would have a meat thermometer. It is the one kitchen gadget I don’t have so I use the super scientific method of putting a paper towel under the chicken’s cavity, tilting it & making sure the juices aren’t pink. This means my chicken is generally a wee bit over done but it still tastes AWESOME. (Ohh….and you might notice that the chicken in the pic had a popup thingee that’s supposed to tell you when it’s done….They lie! I gotta go buy a thermometer!)

Viola…..you have dinner! I usually make this on Sunday night and then you can use the leftovers for another meal during the week. This week, I chopped up the chicken, potatoes, carrots and some frozen peas & combined them with Patak’s Tikka Masala cooking sauce for a scrumptious curry. Steam some rice and viola you have a quick and yummy dinner #2.

Don’t forget to stop over at Shan’s to see what else is cooking this Wednesday!