I’m back with another post for Food Revolution Fridays hosted by the lovely Scattered Mom!  This week I decided that I wanted to actually cook some of Jaimie Oliver’s recipes since I’ve never tried any (shhhhh….don’t tell him).  It was beginning to look like it wouldn’t happen after dinner out on Monday and a disappearing husband on Tuesday (hockey game).  Finally on Wednesday there was someone to cook for & I got out of class early.  I decided to go all out and make a few different recipes (all new to me) from Jaimie and Scattered Mom herself.

For my first recipe, I decided to make the Broccoli Salad recipe that Scattered Mom had raved about.  It was all that she had promised.  So yummy!  I have been a long time fan of broccoli salad but many recipes rely heavily on mayonnaise and sugar to make them taste good.  Not this one!  I used turkey bacon so it was healthy too.  You can find the recipe here! 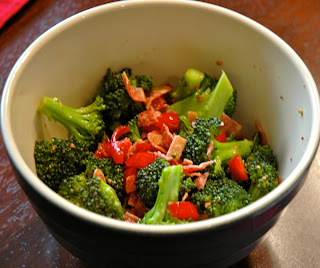 Since I was home early I thought…..”Hmmm….what have I been wanting to make that I never have time for?  I know….bread!”  Out came the recipe for focaccia bread that I’ve been drooling over at, you guessed it, Scattered Mom’s blog.  I decided to sub half of the all purpose flour with whole wheat flour.  It turned out good but I think with that substitution it needs some additional salt.  You can find this recipe here. 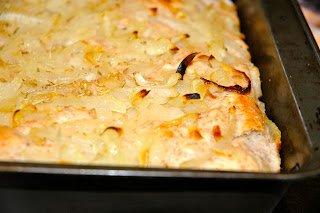 At this point I thought….what the heck am I doing.  I have worked my butt off and I don’t have a main dish to serve to the fam.  Eeep.  I briefly considered scratching the rest of the menu and throwing something together with *ahem* packets but I decided to keep going.  Next on my list of things to make was Jaimie’s Classic Tomato Spaghetti (though I used corkscrew pasta) for a side dish instead of a main course.  It was a very simple and easy recipe though I must admit that I prefer my pasta a bit saucier.  I might play withe pasta/sauce ratio when I make it again.  The leftovers were even better the next day. 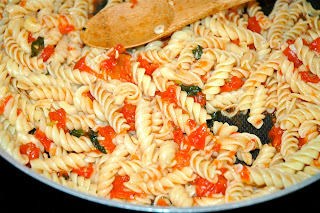 Our meal was completed by a grilled turkey Italian sausage.   I know this sounds like tons of food but everyone got small portions of everything.  Dewey kept saying how impressed he was that I made a complete dinner from scratch (everything but the pasta).  It did take longer than it normally takes me to make dinner but I think the reason was because of the bread & because I made so many new things.  I definitely think that cooking from scratch on a daily basis is doable most of the time.

Head on over to Notes from the Cookie Jar to see other Food Revolution Friday posts!

I love the name of your blog - very cute and catchy. Jamie Oliver rocks. I would not want to cook from scratch daily even though it is "doable." However, few times each week it is fun.The Broccoli Salad you made looks delicious. I'm now following you on Google Connect :)

Thanks for stopping in Nugglemama & Scattered Mom.....The biggest issue I have with cooking dinner is that I often don't get home until 5:30 and Evan needs to eat as close to 6 as possible. I do really well if I meal plan. Otherwise we end up like we did tonight....with pizza. (Actually we only have pizza once in a while b/c the hubby likes it).

Cooking from scratch is definitely doable on a daily basis. Just give yourself a half hour more and it can be done :) Tastes better too. I am stopping in from UBP10!

Ooo yummy! I like my pasta really saucy too, so I'll remember that. I haven't tried the foccacia with whole wheat flour yet. Pickling salt on the top definitely adds to the saltiness.